In the previous post, I shared with you my pleasant experience of travel 3 days to the city of Tromso (Norway) on the December bridge to see northern lights and enjoy its magical surroundings.

As I mentioned, there are no direct flights to Tromso, so a good option if you decide to visit this place in Lapland, is to take advantage of the flight scale to spend a few days in the Nordic capital, Oslo.

I know that two days It may seem little when choosing to visit any city in the world, but because Oslo is usually used more as a link point to go to other cities in Norway, as in my case Tromso, than as the final destination of our trip, time will be enough to get to know the city and its main places.

Although Oslo is not a tourist city par excellence and is a destination for me to discover, I have been told that it is worth visiting. So in this post, I will count on the contribution of Cristina, a friend who has been encouraged to write and wants to give you some brushstrokes of what you can see if you have extra days on your trip to Norway. And I am delighted that he does it 🙂

What to do in Oslo in 2 days

Hi everyone! My name is Cristina and I want to share with you our experience in Oslo. We had a few more days of vacation than Dani, so before meeting him and the rest of the group in Tromso to enjoy our amazing trip of friends, we take advantage of the scale in the capital to spend a couple of days in the city. We could not miss this opportunity to get to know Oslo, so along with other friends of the trip, we went on to form what we would later call: Advanced Group of “The Boreal Hunters”(Hunters of Auroras), with a first expedition in this important Norwegian city.

Oslo, or the formerly called Christiania, is the capital of Norway and is located on the south coast from the country. It is the city Norway's most populous besides being its nerve center.

How to get to the center of Oslo?

Oslo has several airports, but if you are looking for an option to economic flight, your point of arrival will be that of Gardemoen. This airport is the largest in the country and is somewhat remote from the center of the capital, about 50 km to be exact.

To reach Oslo, the fastest and most profitable option for your pockets, will undoubtedly be the train. There are several lines that will take you to Oslo Central Station, from the express flytoget to state railways NSB. Our recommendation is that you take the normal as we did, since it costs half the first, about 10 euros, and it takes just 10 more minutes.

Where to stay in Oslo?

We opted for stay downtown from the city in the Hotel Verdandi Oslo. For about 70 euros Night with a highly recommended buffet breakfast, you can stay at this hotel and have an excellent location, next to the National Theater and surrounded by historic buildings such as the City Hall, the Parliament or the Oslo Central Station. We took a train at the airport that took us directly, in about 30 minutes, to the National Theater station, which was 5 minutes walk from the hotel. So my advice is that you look for something central with the comfort that you can go to most places walking without using public transport.

Although the temperatures of Oslo in the month of December (its average temperature in this month ranges between the maximum of 1 to – 4 degrees minimum) are not the most desired when you think of traveling to a city, do not be scared. Provided with a good coat and thermal clothing you will be more than equipped and you will have the advantage at this time to enjoy the Christmas charm from the city. In the winter months it is advisable to wear good shoes that keep your feet warm and whose sole does not slip. Due to the snow and frost during these months, it is likely that some of its streets present ice sheets and you have to make use of your hidden skills of professional skater, if you do not want to try the cold Nordic soil.

We found a Oslo covered with a thin layer of snow, since previous days it had snowed and due to the cold, the snow had not yet melted. But the temperatures, although cold, are perfectly bearable if you go with appropriate clothes.

What to see in Oslo in 2 days?

One of my favorite options when traveling anywhere is to make a free tour to know the main monuments and places of interest, being able to discover with the explanations provided by the guide, a little the culture and history of Oslo, being this very good option for a first contact with the Nordic capital. Oslo offers several options to carry out this activity with a guide in Spanish, the well-known company Civitatis or freetouroslo.com, with a duration of approximately 90 minutes.

On our 2-day visit to Oslo, we hired the second option (Free Tour Oslo) and at 10 in the morning we walked from the hotel to the departure point of the tour, the famous Jernbanetorget, in front of Oslo Central Station. It is a sculpture of a bronze sculpted tiger which was given to the city to commemorate its thousandth anniversary in the year 2000.

Next to the tiger is also the sculpture of a hammer breaking the symbol used by the swastika Nazis. Although it looks like Thor's hammer, this large steel carving is a reminder of the effort made by resistance groups in Norwegian territories during World War II. 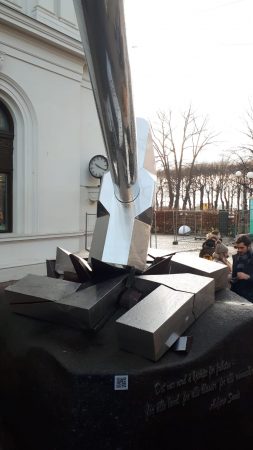 During the tour we toured the main historical places that no tourist should overlook, such as the Oslo Opera House, its Town Hall, its famous Karl Johan Gate or the National Theater among others. The avant-garde building of the Oslo Opera House whose disturbing architecture clad in white marble and glass makes it seem to resurface from the same waters of the fjord. Building simulates an ice block over the sea and its interior is clad in wood. Its exterior allows you to walk over the building and access the roof of the building to enjoy unique views of the city and the fjord. In my opinion, the most different and most charming place What to visit in Oslo in 2 days. Will not leave you indifferent!. 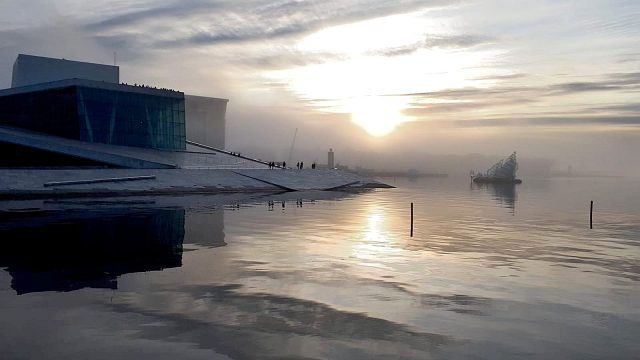 Another must stop in the Norwegian capital is the famous Vigeland Park. It is a park with more than 200 granite or bronze sculptures whose theme focuses on the passage and the agony of life. In its central part stands one of the icons of the city, a 17 meter high monolith with more than 200 human figures that are intertwined representing the cycle of life. 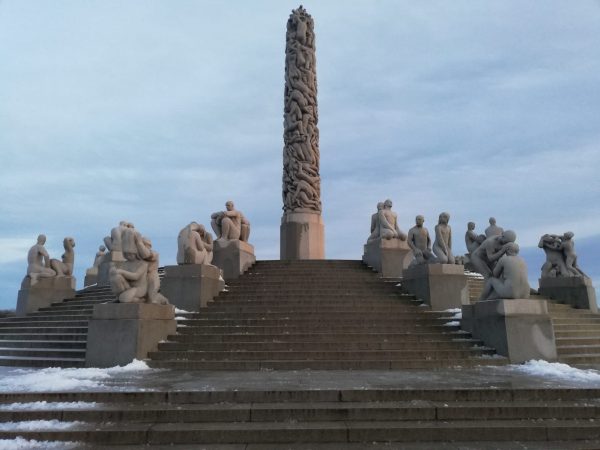 You also can't ignore the Arkeshus Fortress in the heart of Oslo, located in a strategic enclave by the sea. It is a medieval fortress that has been the scene of numerous battles throughout its history and whose interior you can travel for free. If you have plenty of time and are interested in this theme, you can enjoy the museums housed inside, The Defense Museum and the Resistance Museum.

As to museums refers, Oslo houses the Viking Ship Museum, in which the best preserved Viking ships in history are exposed. We lacked time and we could not go, but it was something that we had recommended and that we had in mind before the trip. So if you have more time, this museum offers you an opportunity to delve into the Viking history of Norway.

If you feel like entering more into the life of Oslo, you can visit one of the most popular areas of the capital, the hispter district of Grunnerlokke. Its lively streets, famous for its street art and its refined bars and clubs, will make this place an ideal place to take a walk while touring its vintage shops while also being a good alternative to enjoy a beer or dinner . We were in the evening taking a walk and took the opportunity to take some beers by 5 euros, in a bar in the area dedicated to rap music. A price given in Oslo, since a beer usually costs between 8-9 euros due to the high taxes that alcohol has in the country.

If it happens to you like us, which in December already begins to surface Christmas spirit, We recommend you visit the jumble sale which houses the Youngstorget square , so if you want to give free rein to the first Christmas shopping with typical Norwegian products and surrounded by a most pleasant environment, this will be an ideal place.

It is a Christmas-themed street market that houses more than 50 exhibitors, located around an ice rink where you can slip on some skates and enjoy the atmosphere it offers. It has stalls of all kinds, from clothes, toys or Christmas decorations, to typical food stalls such as the famous Norwegian salmon, cheeses, deer burgers or traditional sweets, which you can taste or purchase to savor on your return to Spain. I took the opportunity to buy some envelopes of Norwegian smoked salmon, which a kind shopkeeper gave me to try and I loved it. 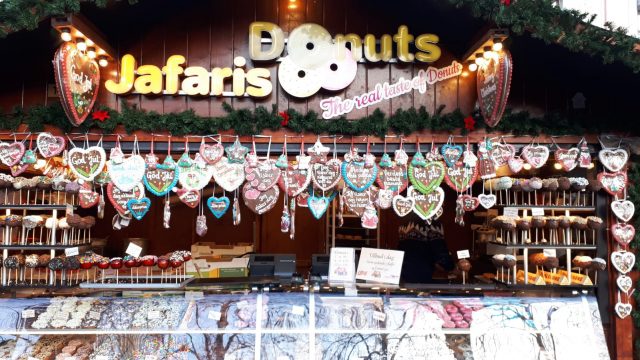 We cannot forget the area of Karl Johans Gate, the Oslo's main commercial artery. Along this street, which connects the Parliament with the Central Station of the city, you can find a wide variety of clothing, decoration and souvenir shops, as well as a great gastronomic offer. I propose that you take a walk through the streets and shops of the area, and if you are looking for a souvenir or gift, these streets will undoubtedly be your best ally to buy what you are looking for.

Where to eat in Oslo

We already know that Oslo is also known for its high economic level, so one of the main concerns when we travel to the Nordic country is its high prices. I'm not going to cheat you, Oslo it is not cheap, but you can find affordable places to eat without shivering your checking account. In the tour we did, they explained that in Norwegian schools they have the subject Cooking, which allows children to learn from a young age to master the cuisine of the country. That is why, most of the restaurants are designed for tourists So in some prices are very high.

One of Oslo's options for eating is that you can find a multitude of fast food chains to eat without spending a lot of money. But if you want to enjoy the typical cuisine of the country, you can also find restaurants where you can taste local dishes at a more than reasonable price. My main recommendation is the restaurant Elias Mat & Sant, located a few minutes from Parliament. With a pleasant atmosphere, in this restaurant you can taste, for a price of about 30 euros, some of its rich star dishes, such as the Salmon, reindeer stew or cod. The menu is not very varied, but it is very tasty homemade food at a good price. I hope that my contribution to this fantastic blog will help you and that if you finally visit Oslo, do not hesitate to share your experiences and advice, everything will be welcome 🙂