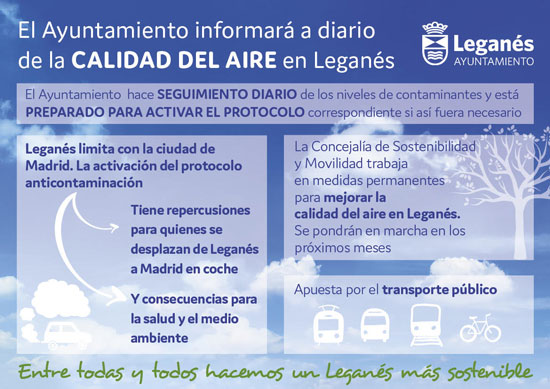 BECAUSE THERE ARE NO HIGH POLLUTION EPISODES

The City Council of Leganés will report daily on the situation of air quality in the municipality even though there are no episodes of high pollution and will also report the activation of anti-pollution protocols in neighboring municipalities. Leganés borders Madrid and the activation of the anti-pollution protocol in the capital has repercussions for those who travel from Leganés to Madrid by car and consequences for health and the environment.

Although the data on air quality in Leganés do not reach the minimum level established for the activation of the anti-pollution protocol for nitrogen dioxide, the City of Leganés is concerned about the situation that is being lived in the capital, where already the anti-pollution protocol has been activated for having exceeded these values ​​in different measuring stations.

The Councilor for Local Development and Employment, Celebrations, Sustainability and Mobility, Fran Muñoz, stressed that "the situation is similar to that of other years on these dates and similar weather situations." In this way and although “in Leganés the levels to activate the different protocols have not been exceeded, we are concerned about the situation in the city of Madrid, to which thousands of people resident in Leganés go daily” so “we will keep informed citizenship on the situation on a daily basis through the official channels of the City Council, ”said the mayor.

In recent weeks the measurement stations of Leganés and other nearby points have collected high values ​​of PM10 and PM2.5 particles and nitrogen dioxide, but not so high as to activate the municipal protocol. The technical services of the Delegation of Sustainability report that the situation of cold temperatures with thermal inversion is responsible for the PM10 and PM2.5 particles being punctually high. Meteorological stability does not allow the dispersion of pollutants, which is why their concentrations increase as a result of road traffic, among other causes.